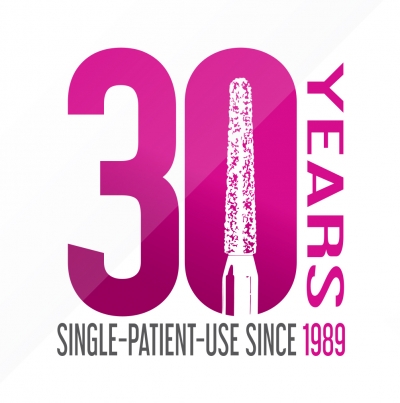 NeoDiamond, the pioneer and #1 single-patient-use diamond, is celebrating its 30th anniversary. Three decades ago, Microcopy co-founder Thom Maass, Jr. achieved his vision to offer a high quality, sterile and efficient dental diamond bur — even coining the phrase “Single-Patient-Use”. NeoDiamond launched, outfitted in the distinctive magenta packaging, in early 1989. The original NeoDiamond line consisted of 16 shapes. Unbeknownst to Thom, NeoDiamond would go on to become a highly regarded brand by dental professionals around the world.

“Much has changed since NeoDiamond launched in 1989,” said Paul Tucker, CEO, “But through the years Microcopy has stayed true to its mission to bring products to the dental market that make dentistry easier and safer.” The NeoDiamond line now consists of 126 shapes in various grits. Most recently, in May 2019, 6 new pediatric short shank diamond burs were released. Microcopy has expanded globally and maintains a focus to offer innovative, single-patient-use products that enable dentists to fulfill a social responsibility to provide better, healthier patient care. It’s no longer 1989 but Microcopy is planning to keep NeoDiamond around for the next 30 years. As Heather Siler, marketing manager puts it, “NeoDiamond was developed with safety and performance in mind, which is still the driving force for the brand today. Great products like NeoDiamond will never go out of style.”

To celebrate NeoDiamond’s golden anniversary, Microcopy wants to hear from NeoDiamond customers, old and new. Microcopy has launched a photo submission campaign, encouraging customers to submit their “NeoDiamond Story” along with a photo, sharing why they started using or what they love about these single-patient-use diamonds. Entries will be submitted into a drawing to win a trip to Atlanta for a tour of Microcopy and select from a list of other exciting places to visit while in the city. To share your NeoDiamond Story visit: https://microcopydental.com/nd-30form.

Tweet
Published in Blog
More in this category: « 3 Money Saving Tips for Dental Practices Pediatric Shapes Added to NeoDiamond Line »
back to top

LET US HELP YOU

This site uses cookies. By continuing to use this website, you agree to their use. For details, please check our
I accept

Microcopy respects the privacy of our customers and pledges to not sell or give out your email address or login information to any 3rd party. You will receive occasional emails from Microcopy alerting you to new products, or related company information.

You can elect to not receive these messages at any time by clicking the Unsubscribe link within the email. Be sure to use a valid email address when you register/sign in so that you can reset your password or, if need be, cancel your account, at any time.

Microcopy will accept returns from US and Canada direct customers once an approved Return Authorization number has been recorded. All returns older than 1 year will require a 15% restocking charge. No returns will be accepted after 3 years from original ship date. All shipment of goods outside of the continental US is final.

Select up 4 items to compare

Sometimes the smallest gesture can have the biggest impact. Let me explain. Given the current weariness of everyone during this unprecedented time, it’s more important than ever for us as dental professionals to help the community feel safe and comfortable about coming back to dental offices.  We know everyone is anxious and we should be doing anything and everything we can to remove that anxiety.  The thing at the forefront of everyone’s mind is infection control and cleanliness.  As the market leader of SPU (single-patient-use) burs, we firmly believe that one way you can reduce your patients’ fears about cleanliness is by using a fresh bur for every procedure.  It’s been proven time and time again that multi-use burs cannot be sterilized 100% of the time.  Ease your patients’ minds by showing them the sterile packet and opening the bur in front of them.  This shows that you’re using sterile products, but more importantly it shows them that you care—it shows your dedication to them and their health, and that you are doing your part in easing their minds during this time.  It’s a small gesture, but it will make a big impact.  We have started a new campaign titled SPU4U. Educating the patient that you and your practice are single-patient-use for THEM.